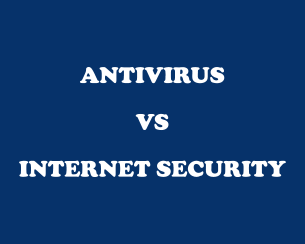 Many people who are considering security options for their devices often become torn between whether to opt for an antivirus or an internet security suite. Making a choice can be quite confusing, given the fact that there are some similarities between the two.

Aside from price, most people can barely tell the difference. However, understanding the difference is important not only to ensure maximum security for your PCs, but also to ensure that you get value for your money.

This article will break down both the similarities and differences between anti-viruses and internet security products. But before we getting to that, it is important to understand something about cyber threats. There are two major categories of security threats which a typical computer user faces. For the sake of brevity, let us categorize them as “basic threats” and “advanced threats.”

The basic threats are those posed by viruses, Trojans and worms. They are considered basic for two reasons. First of all, the damage they cause is comparatively short-lived. Secondly, they are easy to deal with. As soon as they are discovered, they can easily be fixed, and any damage they caused reversed.

The advanced threats are those which are posed by sophisticated programs and programmers. Examples include phishing attacks, identity theft, spying by government agencies, hijacking your computer and using it for malicious intentions. The tools of such threats include spyware, zombies, rootkits, botware, key loggers or direct hacking. They are usually aimed at getting sensitive financial information which can be used to steal your money, or sensitive personal information which can be used to blackmail you. Such threats are incredibly difficult to detect, and yet the damage they cause is sometimes irreversible.

Antiviruses are generally designed to protect your computer against the basic threats. Each antivirus comes loaded with the signatures of all the known viruses, worms and Trojans. As new ones get discovered, they are added to the virus definitions. These definitions are automatically downloaded by your antivirus whenever you connect to the internet. Basically, an antivirus protects your computer against the threats which it knows. As long as you keep updating your virus definitions, you will be safe from them. However, when faced with a sophisticated attack, an antivirus is powerless. You need an internet security suite.

Given the comprehensive nature of its coverage, it would seem that an internet security suite should be the perfect choice for everyone. Well, it depends. If you regularly carry out financial transactions online, using credit cards, Paypal or any other payment service, then you definitely need an internet security suite. It is the only way you can guarantee the safety of your personal information. If you are also paranoid about being spied upon, or in need of the extra features such as parental control, then an internet suite is perfect for you.

However, there are two categories of people for whom an antivirus might just be sufficient. The first category is those who have relatively old machines. Most internet security suites use up a lot of computer resources, especially RAM. If your machine has RAM below 1GB, an internet security suite may slow down your machine to the point of annoyance. Most suites require significant amounts of RAM to run.

The second category is occasional internet users, or those who feel they don’t store any sensitive information on their devices. If you fall in this category, then there’s no need to spend the extra cash on an internet security suite. There are many an antivirus out there that can provide you with sufficient protection.

So, the ultimate question is: which one to choose antivirus or internet security? Well, that depends on your security needs. The best option is the one which offers you a feeling of security and peace of mind.