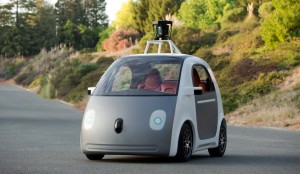 Self-driving cars is no more a novel concept. Google has launched the new self-driving car, taking the driving experience to a whole new dimension. The technology that has been employed was tested for many years by retrofitting the existing cars.

The car is fitted with very basics. The steering wheel, pedals, mirrors, gauges etc are no more a part of these. However, the car has been designed in a way so as to return the controls of the car to the driver in case of any emergency situation. The “start” and “stop” buttons have been installed for maneuvering the car around. The compact 2 seat look, gives the car an ultra-modern look.

The car has been fitted with numerous obstacle sensors that can detect the presence of any sort of hindrance in the way for up to 2 miles. A radar, a lidar and 360 degree cameras help steering the car with minimum risk of accidents. The speed of the cars is 25mph and is expected to improve after further testing and evaluation. A host of softwares and sensors along with GPS navigation system have been installed in the car which minimizes the risk of running into hurdles.

The car has been linked to a smart phone app that would allow for the car to be summoned up and to drive the passengers to the chosen destinations without any human involvement. The whole purpose of self driven cars, as Google puts it, is centered upon the safety of the passengers. Many a times, adverse mental condition or drinking bouts render a person incapable of driving. Such situations call for the need of a vehicle that can drive its passengers around.

A Google spokesman confirmed the front of the car to be made up of rubber like material just in case the car goes haywire and hits any pedestrian. Although the traditional gadgets have been dismissed, the rear-view mirrors are still there as the law requires it. The car is completely battery operated proving to be eco-friendly.

A fleet of 100 experimental cars has been produced during the test trials. The initial qualms about autonomous cars have given way to doubts that Google is trying to resolve through further testing. Although the launch of the self-driving car has been a 360 degree turn, Google has given no indication if it plans to go into the car making business.