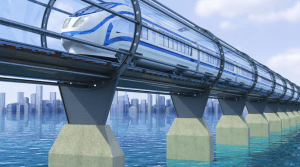 On July 2012, Elon Musk announced his vision for the Hyperloop, an idea that would garner heavy criticism. Musk envisioned a transportation system that could move people from L.A. to San Francisco in thirty minutes. The Hyperloop is a fantasy dream that will soon be a reality. It won’t help Silicone Valley get to work quicker, though. No, the Hyperloop has a much grander future.

Elon Musk and company are currently building a test track in the middle of a desert somewhere. The test track will be used to test how to speed up a train and slow it down while under vacuum and keeping its contents safe. The ultimate dream will be to transport humans, but that won’t be the primary function.

Why do we need Hyperloop system?

The world still has a transportation issue. Moving merchandise is expensive. Part of the reason why prices increased during the United States recession was because the rising cost of fuel.

Imagine how expensive it is to fly merchandise from one country to another or move merchandise across an ocean. It’s not cheap. Logistics and freight are tricky business.

Imagine if those costs could be drastically reduced and we could move product within minutes. The Hyperloop could place tubes between California and Japan and move merchandise at hundreds of miles per hour. We could move an entire truck’s worth of cargo across the ocean in hours, instead of days, at a fraction of the cost.

These same tubes could move product across large land masses. We could utilize them in cases of emergencies. We could save lives by being able to deliver precious medicine when it’s needed.

The Hyperloop will be expensive to design and engineer. We have a lot of work to do, but once all the kinks are ironed out, it will be cheap and easy to build and deploy around the world.

Until then, we won’t mind if a few packages go missing in an accident. It’s far easier to forgive a few packages then a few people. That sounds kind of harsh to say, but it is true. We will trust the Hyperloop to move our stuff long before we trust it to move us.

That’s okay, though. We need a new transportation system, and it will soon be here.